Get the latest information and travel alerts, including health and safety protocols for all Adventures by Disney trips. Learn More


Please be advised that beginning January 1, 2023 the Contact Center hours will change to the following:

Embark on the journey of a lifetime as you head north into stunning landscapes that feature massive fjords, glaciers and ice floes and snow-capped mountains. You’ll be awed as you encounter a variety of wildlife—from puffins to polar bears—that call the region home. Plus, experience Longyearbyen, the world's northernmost settlement, as well as Oslo, the vibrant capital city of Norway. 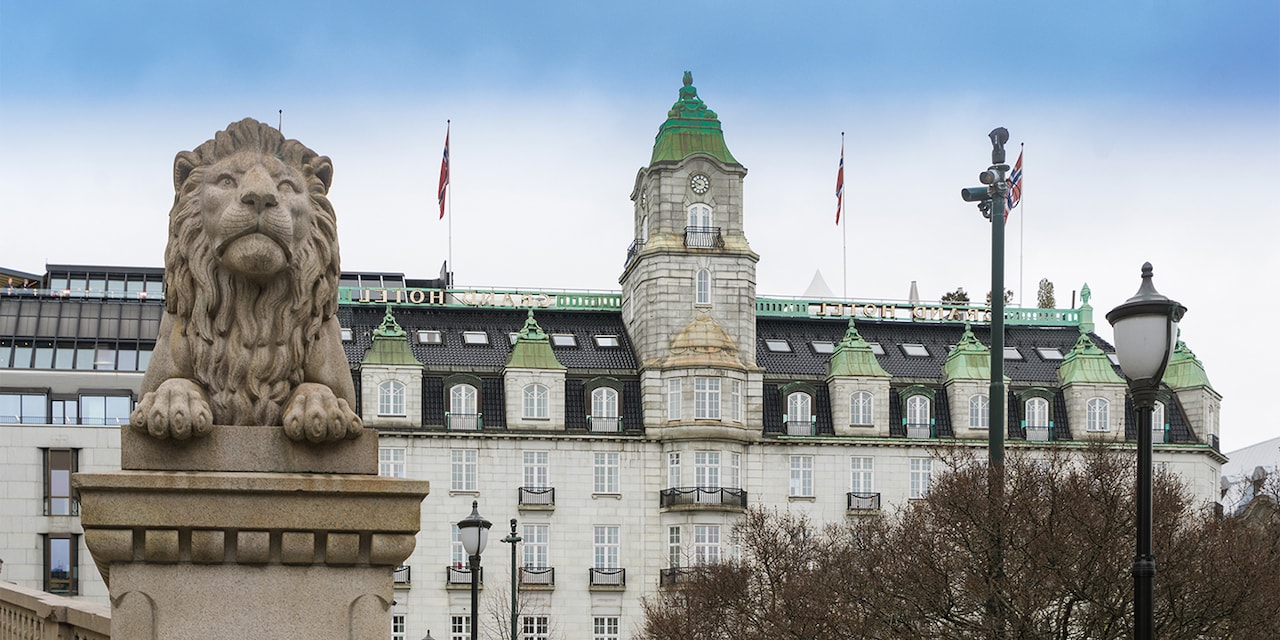 Velkommen til Norge! Upon your arrival in Norway's capital, you'll be enveloped in a city that is steeped in a history that dates back to the 11th century, while embracing its role as a modern global city and hub of Norwegian trade, banking, industry and shipping. Oslo is a city of diverse architecture, a robust cultural scene and is a global leader in green initiatives, making it one of the most livable cities in the world.

Following your arrival, you will be met by an Adventures by Disney representative who will help with your bags and ensure a hassle-free transfer to the hotel.

A true icon and symbol of elegance, the Grand Hotel Oslo has hosted guests, celebrities and Nobel Peace Prize winners since 1874. This historic landmark is located in the heart of the city and is only a few minutes' walk to many of Oslo's attractions, museums, shops and restaurants.

When you arrive, meet your Adventure Guides at the hospitality desk where you'll get a brief orientation that includes information and recommendations for Oslo, as well as where to meet for dinner and logistics for the next morning.

On Your Own Exploration in Oslo

Take to the streets of this amazing city and soak up some of what it has to offer, including Frogner Park, the Kon-Tiki Museum, Norsk Folkemuseum and Akershus Fortress. You may also walk through some of the diverse boroughs or stroll along the Oslo Harbor, a popular destination for tourists and locals alike.

Join your Adventure Guides and fellow Arctic Adventurers for a private, after-hours experience at Oslo's renowned Fram Museum. Dine on regional specialties during what is sure to be a unique and special meal.

During the evening, explore the museum’s fascinating exhibits that highlight the history of polar expeditions. The museum is also home to the polar ship Fram, the world’s strongest wooden ship that made exploring the icy polar waters a possibility. Guests can board the ship for a glimpse into what life was like for early polar explorers. 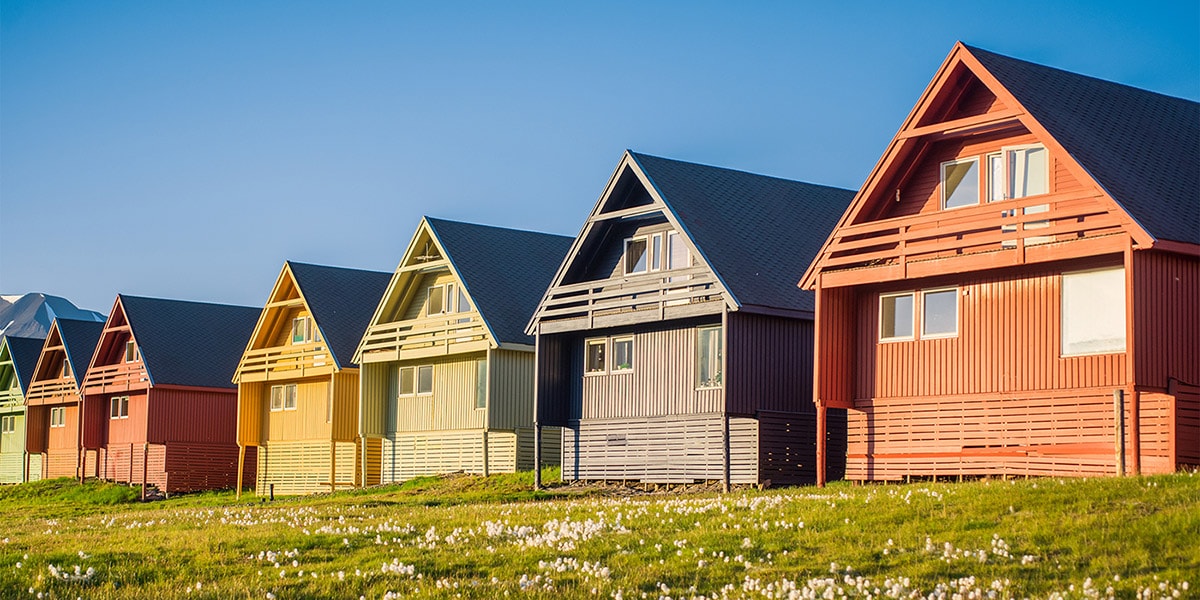 OSLO, LONGYEARBYEN AND AT SEA

Enjoy breakfast before your flight to Longyearbyen.

Transfer from the hotel to Oslo Gardermoen Airport (OSL) where you'll fly to Svalbard Airport (LYR) in Longyearbyen.

Lunch: En Route or in Longyearbyen

A lunch will be provided either en route to Longyearbyen on the flight or in Longyearbyen. This will be based on actual flight times. Your Adventure Guides will provide more details in destination.

Upon your arrival in Longyearbyen, the northernmost settlement in the world, you will board pre-arranged transportation and begin your pre-selected adventure.

Please note: Activity options will be confirmed approximately 90 days prior to the start of your adventure. Some activities have limited capacity and are on a first come, first served basis.

Activity options may include, but are not guaranteed or limited to:

Ship Embarkation & On Your Own Ship Exploration

Arrive at the port and receive a warm welcome aboard your home for the next 7 nights—a luxurious PONANT ship that provides an intimate atmosphere combined with cutting-edge technology and an array of top-of-the-range services. Once you are checked in, you’ll find your luggage waiting for you outside your room. After settling into your stateroom, head out to explore the ship and all it has to offer, including:

Gather together with your fellow Adventurers and Adventure Guides for a shipboard welcome and orientation where you will meet your Expedition Leaders, naturalists and the ship's crew. You'll also receive a mandatory safety briefing at this time.

Enjoy a delicious meal at your leisure in either of the ship's 2 onboard restaurant options that will satisfy any appetite.

Say farewell to the city of Longyearbyen as you kick off the start of your amazing Arctic adventure with a celebration as you leave the port behind and sail out towards the ice floes, glaciers and beautiful scenery above the Arctic Circle. 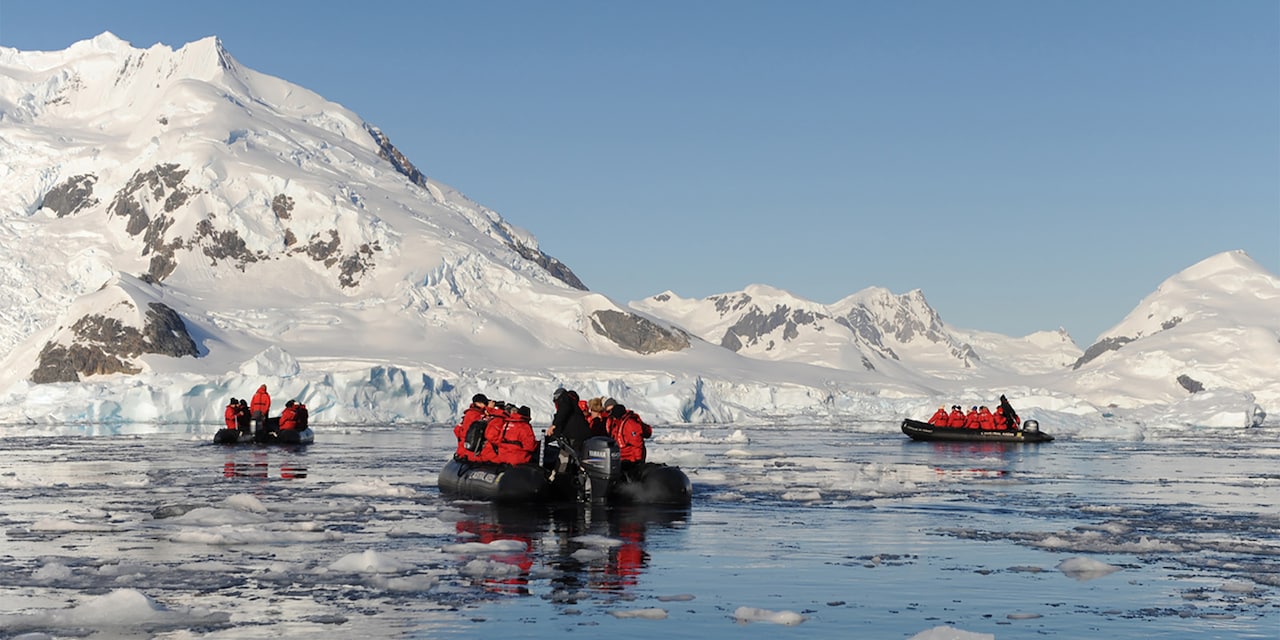 Go with the “Floe” Flexible Itinerary

Every day of your Arctic Expedition Cruise is a unique Adventure and it is important to note that flexibility is key. Nature takes center stage on this expedition as ice and weather conditions will determine how the ship's Captain and Expedition Leaders plan each day's excursions and activities—which means that every day is a new adventure offering "in the moment" opportunities to explore this pristine natural environment and the wildlife that calls it home. But whether you're on land or onboard the ship, you'll be surrounded by a breathtaking landscape ranging from icebergs to ice floes to the Arctic tundra.

Daily itineraries for the following day will be shared in the daily program that is distributed each night. Excursions and activities may change due to ice and weather conditions. Special onboard Guests are also subject to change without notice. Your Adventure Guides will keep you updated on any changes.

Each day will feature 2 excursions, pending weather conditions—morning and afternoon. The fluid schedule allows you to experience once-in-a-lifetime moments as they unfold.

The following are possible daily stops during the sailing and may include, but are not limited to:

Excursion Experiences may include:

Onboard activities offer fun and informative entertainment for Guests of all ages—including special activities for our Junior Adventurers, as well as some that are just for adults. Activities may include, but are not limited to:


Please note: Itinerary and activities may vary and are subject to change or cancellation and will be confirmed in the daily shipboard program.


Meals on the Ship

All meals are included and available at leisure in either of the ship's 2 restaurants.

Farewell Reception on the Ship

On the final evening of your journey at sea (Day 8), join your fellow Adventurers for a farewell reception as you tell tales and swap stories about the amazing adventure you just shared cruising the Svalbard Archipelago. 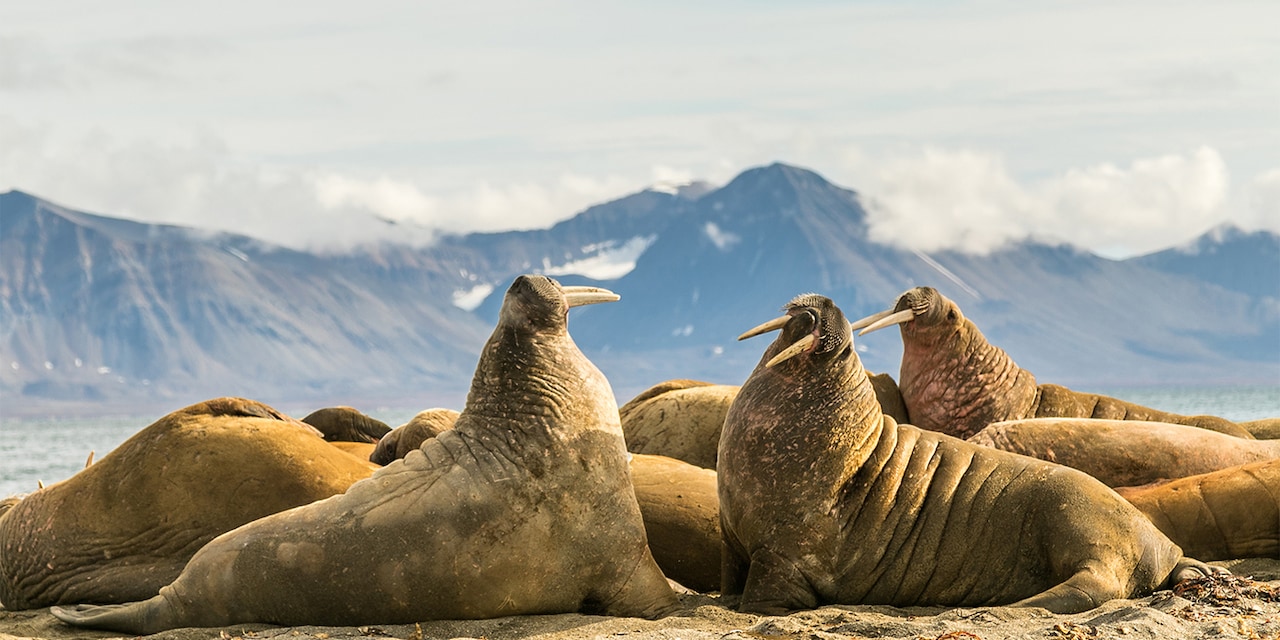 Disembark the Ship, Flight to Oslo, Explore Oslo On Your Own

Breakfast on the Ship

Get your day off to a good start with a final breakfast onboard the ship.

Bid your fellow Adventurers a fond farewell following an exciting, adventure-filled trip to the Arctic. Disembark the ship in the morning and transfer to Svalbard Airport (LYR) in Longyearbyen for your flight to Oslo.

Relax and enjoy your flight to Oslo which includes a lunch en route.

Evening & Dinner On Your Own in Oslo

Spend a fantastic evening exploring the magnificent city of Oslo on your own. The Grand Hotel Oslo is conveniently located in the heart of the city and within walking distance or close proximity to many local shops and popular attractions for you to explore. After you've worked up an appetite exploring Oslo, enjoy a delicious dinner at a local restaurant. Your Adventure Guides will be happy to make a recommendation that you and your family will enjoy or discover a new favorite place as you walk around the city. Enjoy a final breakfast in Oslo and fuel up for your journey home.

Bid Oslo, the Arctic and your newfound friends and Adventurers a fond farvel. Board pre-arranged transportation from the hotel to Oslo Gardermoen Airport (OSL) to catch your flight home.

Please note: Spa treatments are available for an additional fee.

Joe Rohde recently retired from a 40-year career with Walt Disney Imagineering. During that time he was a pivotal figure in the development of Disney's Animal Kingdom and Aulani, A Disney Resort & Spa in Hawai‘i, as well as many other projects around the world. He was part of the original design team for the Norway Pavilion at EPCOT, art directing the concept design of the ride, Maelstrom. His last large project was Pandora: The World of Avatar at Disney’s Animal Kingdom, which opened the same year as another of his projects, Villages Nature, an eco-resort adjacent to Disneyland Paris.

Joe's work has always been characterized by high levels of authenticity based on extensive field research. He was instrumental in the creation of the Disney Conservation Fund, which has raised over $100 million for missions worldwide. Joe regularly lectures on design, art history, and conservation and has spoken at TED, NASA, SIGGRAPH, and many other venues. He is an award-winning member of the Explorers Club and carries a large collection of indigenous earrings in his left ear as souvenirs of his many adventures. For fun, he paints and creates art history singalongs for his Instagram account which boasts over 95,000 followers.
Close Modal
End of modal dialog.
Beginning of modal dialog.

Ship accommodations are based on your departure date: 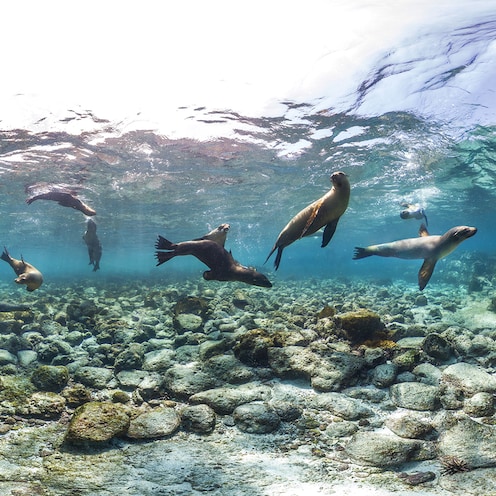 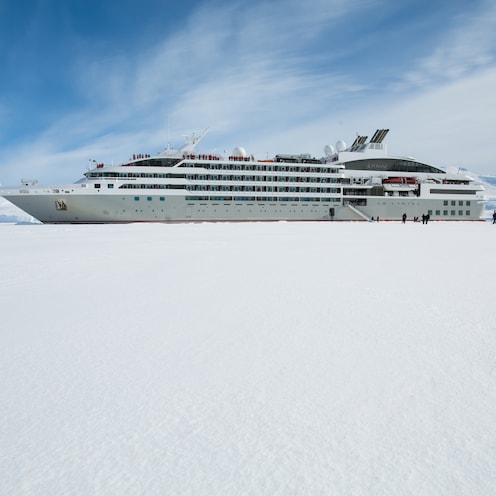 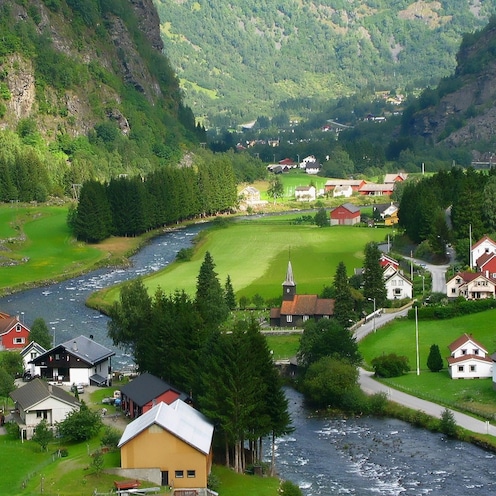 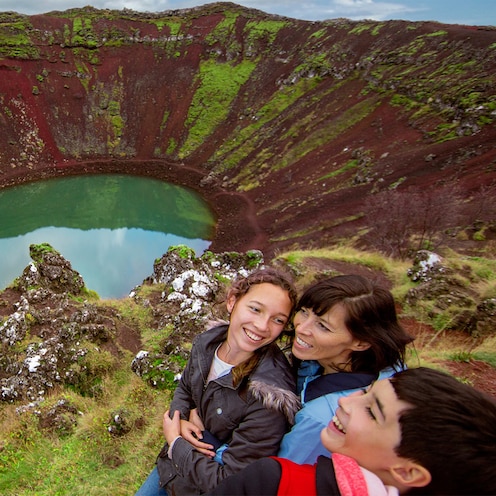 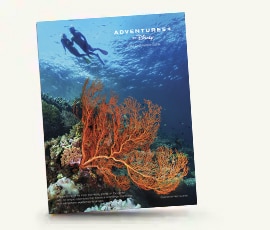 Tell Us What You Think!

Would you like to help us make your experience even better by participating in a brief survey about adventuresbydisney.com?
YesNo
Close Modal
End of modal dialog.
© Disney, All Rights Reserved, Disney Entertainment